Growing up in a family business, as many of you will know, you start working as far back as you remember. I always thought my parents had four children just to enhance the workforce! My brothers, sister and I used to make tomato boxes in the summer, 1p per box and help out in the shop at Christmas for money to buy presents. It was great fun. Here is how it all began…

The Company was founded by FTB (Tom) Lawson in 1904. The son of a missionary Tom was born in the Caicos Islands. He returned to England and became an apprentice ironmonger in Preston. From there he moved to Newcastle as a shop manager before coming to Plymouth to settle down to marry Louise Leale from Guernsey.

With the help of his wife he opened his first shop, a tool merchant, in 13 Frankfort Street, Plymouth in November 1904 to supply the dockyard and apprentice craftsmen. By 1907 he was producing a tool catalogue annually for his customers. In 1923 his wife Louise bought the freehold of the shop.

In 1910 he started another business with his in-laws from Guernsey. This time a market garden business growing tomatoes and grapes. 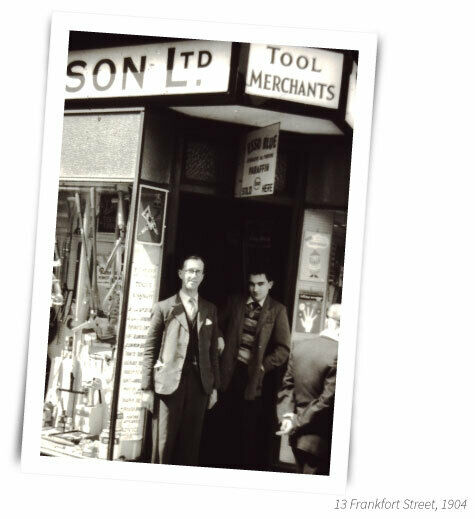 During the Second World War the market garden was the larger business, as it was needed to provide food for the country.

On March 21 & 22 1941 the Lawsons shop at 13 Frankfort Street was bombed during the Blitz and completely destroyed. Within two days they had set up shop as Francis Lawson (Tom’s son) said in a letter “We have a quantity of goods on order that can be put at the disposal of the public.”

In May 1941 Lawsons rented 7 Compton Street, the business then expanded into selling cutlery and toys including Hornby & Meccano. The Compton store even had a visit from Mr Hornby himself.

In 1952 when Plymouth was completely rebuilt Lawsons relocated to 71 New George Street, which coincidentally was almost exactly on the same site as their original shop in Frankfort Street. By this time Tom Lawson was retired and Francis Lawson his son oversaw the two businesses. 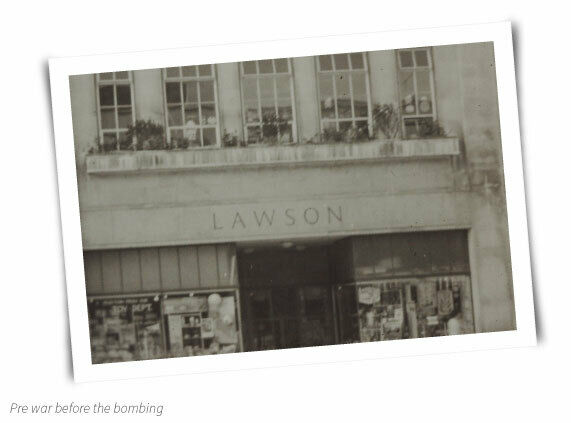 Over the next two decades the business grew its toy department to sell Airfix kits, Aero engines & model steam engines.

In 1968 the New George St store suffered a huge fire causing damage throughout the store. Fortunately nobody was hurt.

In 1971 John Lawson (Francis’s Son) came into the business with his wife Jennifer and their four children! The market garden business went to John’s sister and her husband.

In the late 70’s they noticed the rise in popularity in Kitchenware and started to promote this within the store. Jennifer was also a keen amateur cake decorator and helped to set up the first British Sugar Craft Guild in Plymouth. Lawsons became a specialist in both these areas.

In 1979 Lawsons acquired a shop in Totnes. The staff were dressed in Elizabethan costume on Tuesdays when the town celebrated its Elizabethan architecture.

In 1992 in the midst of recession Lawsons acquired a third shop in Tavistock. The building was originally the town corn mill and has a leat running beneath it. In 1994 Liz Lawson (John’s daughter) joined the business as manager of the Tavistock store.

In 1998 Liz succeeded her father as Managing Director. Later that year Lawsons started to sell linens. 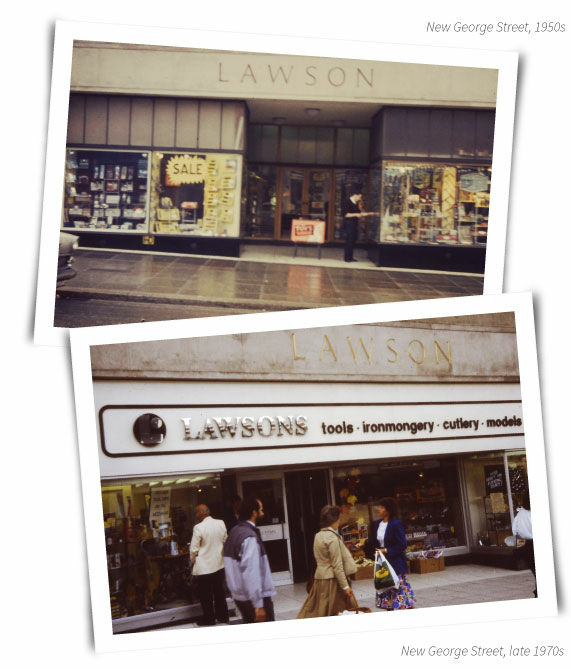 In 2000 Lawsons started trading on the Internet, which was an exciting new venture for the company.

In 2003 Lawsons vacated their New George St property after just over 50 years there to move near a new shopping development in Plymouth. The new site was 13 Cornwall St. at the same time they opened a warehouse for distribution of stock to the stores and Internet customers.

In 2004 Lawsons celebrated 100 years of trading with a number of events including a competition to find Lawsons most loyal customer who had been shopping with Lawsons since his boyhood for nearly 70 years.

In 2006 Lawsons bought an existing hardware business in Ivybridge, which trades from two stores. One specialising in DIY, Gardening, Pets Supplies & Outdoor Clothing and the other in Kitchenware & Linens.

2014 was a milestone year for Lawsons, with the company celebrating its 110th year of trading and Mr John Lawson receiving the Lifetime Achievement Award at the Plymouth City & Waterfront Awards.

To mark the 110th anniversary, ceremonial re-openings of each store took place, with Lord Mayor Councillor Vivienne Pengelly officially reopening the Plymouth store and new signage displaying “110 years, serving you since 1904” being added to the shop front of the Plymouth store.

2015 marks another exciting year for Lawsons with the introduction of a brand new website with a great number of new features including the ability to filter your products by colour, price and brand, read and leave product reviews and save items to your wish list to view at a later date. 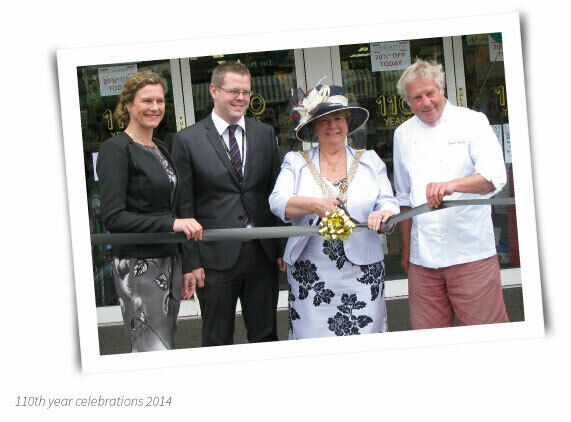 2015 marks another exciting year for Lawsons with the introduction of a brand new website with a great number of new features including the ability to filter your products by colour, price and brand, read and leave product reviews and save items to your wish list to view at a later date.

We also added haberdashery departments for all our stores, sold real Christmas trees sourced from Dartmoor in Tavistock for the first time and worked with Tavistock College to stock their school uniform, Tavistock also started opening on a Sunday

2016 was the year of the spiralizer and quickly became our top selling kitchen gadget!

In 2017 we worked with King Edwards IV school in Totnes to supply their school uniform and introduced a new china departments across all our stores including brands Denby, Churchill, Royal Doulton, Portmierion and Sophie Conran.

2018 was a year of extreme weather with the Beast from the East giving us snow in March and then having a heat wave in June & July. We started a Plastic Free Campaign and introduced a number of products to help customers move away from using single use plastic and stopped selling ourselves.

2019 the debate around BREXIT loomed large until it was decided by the referendum that we would be leaving the EU trading agreement. We also had a snap election in December this all had the effect to undermine consumer confidence leading to one of the most difficult years of trading seen on British high streets. Lawsons fought back by introducing our fifth version of our website going into partnership with Vertical+. Firstly launching a brand new website www.cake-stands.co.uk in June and then a new www.lawsonshop.co.uk in November.

Flavour Fest has been running in Plymouth for the last 16 years after we joined with the council to provide a regional food festival in Plymouth city centre. Lawsons were a founding sponsor and integral in providing the chef demonstrations at the event. We did not know it then but this would be the last year we would be able to be involved.

2020 COVID 19 came to our shores and on 23rd March along with everyone else we listened to the Prime Minister Boris Johnson stating the country would enter a national lockdown. The following day we realised that we were classed as an essential retailer and could still open but without any COVID safe protocols in place this became impossible so we decided to operate with our doors shut and took orders over the phone and online. Our website sales grew daily and doubled every week. With garden centres having to close customers quickly realised that we could supply compost, seeds and plant pots. In addition home baking was very popular with everyone who remained at home. On 18th May we were allowed to re-open and on 5th June all shops were allowed to open.

Unfortunately we had to take the sad decision to close our Plymouth shop permanently after 116 years of trading. This was due to the poor sales we had experienced over the last 3 years and the decrease in footfall the city centre was now experiencing meant the shop would not be viable.

Our stores were closed or partially closed for a total of 19 weeks over the year but we were happy we could support our local communities throughout this trying time with home delivery. We would like to pay tribute to all our team who have worked tirelessly, sometimes in difficult circumstances, over the year.