Half term craft for children

Ah, half term. A week to enjoy spending time with your children, not pushing them out of the door in an early morning whirlwind of 'put your shoes on!' and 'where's your lunchbox?'.

But you know what will happen. By Tuesday afternoon it'll be 'I'm bored!' and the good old British weather will be lending a hand for a sure-fire  'stuck indoors' nightmare.

Don't despair, you can do craft! Honestly, it's fun. And really not all that messy...

Look at these cute little chaps! Who wouldn't want one?

They're super-easy - just cut up paper plates and toilet rolls, paint everything a vivid colour, glue together and stick on googly eyes. Ta-dah!
Idea and images from Good to Know

Suitable for even the littlest ones – so long as a grown-up makes the stamps, of course!

Cut a potato in half, push the cutter into the cut side, cut around the edge with a knife, and remove the cutter. Now all you need is small plates filled with washable paint, plenty of paper, and an enthusiastic young artist.
Idea and image from Gardenista

Making your own is easier than you might think. Use gel food colourings for a richer colour, and you could even add glitter!

Put 1 cup plain flour, 1/2 cup salt, 2 tbsp cream of tartar and 2 tbsp vegetable oil into a saucepan. Put a few drops of food colouring into 1 cup of water, and add to the saucepan. Stir over a medium heat until it is sticky and combined. Allow to cool, then remove dough from the saucepan and knead until smooth. Keep the playdough in a sealable bag or airtight container when they're not using it.
Idea and images from Good to Know

Even easier than using potatoes!

Just fill a shallow plate with washable paint, dip a cutter in and press onto paper. Best with plastic biscuit cutters, with the thickest side dipped into the paint. Stick-on googly eyes are a fun finishing touch.

Yes, they're a bit trickier than everything else shown here - but they're just so yummy! And if you use Easter Egg moulds you can have giant ones!

Put 400g milk chocolate in a bowl and melt it over a pan of gently simmering water until the chocolate temperature reaches 45°C. Don't use a microwave, it will burn the chocolate.

Pour two-thirds of the melted chocolate on to a large marble surface (the kitchen worktop is fine). Use a palette knife to move it back and forth until it starts to solidify.Put it back into the remaining third of still melted chocolate and mix until smooth.

Pour the chocolate into your moulds and tap to release any air bubbles. Leave for two to three minutes, then pour out the excess and put the shells in the fridge for 20 minutes.

Put 50g sugar and 50ml water into a saucepan and dissolve to make a sugar syrup. Take 250g white fondant icing, cut it in half, and knead yellow food colouring into one half. Grate the two colours of icing separately, and mix each with sugar syrup until you have the consistency of buttercream.

Part-fill each chocolate shell half with white fondant, then add yellow fondant to the centre to make a yolk. Stick two halves together with a little melted chocolate.

Recipe and image from ITV This Morning 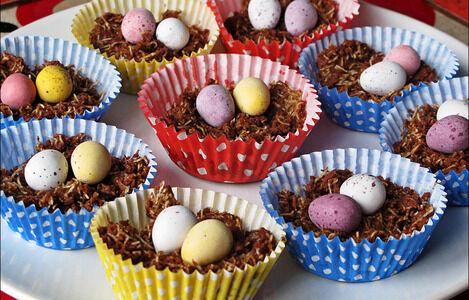 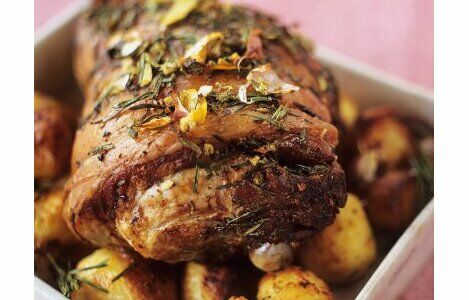 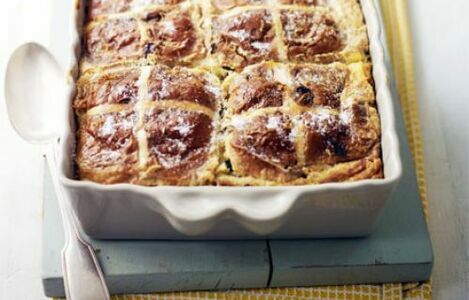 The Best Way To Use Up Leftover Hot Cross Buns